None related to these cases.

IRB Approval
An IRB exemption was obtained from the local ethics committee for publication of these cases and all institutional protocols regarding human subject research were adhered to.

Patients with large cystic ovarian metastatic neoplasms in the liver can experience severe abdominal pain, particularly when there is a significant metastatic burden. Past studies have shown that ultrasound-guided aspiration of large ovarian cystic lesions may relieve pain successfully in selected cases 1-4. Here we describe two patients referred to us for ultrasound-guided aspiration of ovarian cystic lesions of the liver to alleviate pain. If pain relief could be achieved, these patients would be potential candidates for percutaneous sclerotherapy, which is an effective, safe, and minimally invasive technique to manage symptomatic hepatic cystic lesions5-7. However, it needs to be emphasized that management of cystic neoplasms metastatic to the liver usually does not include aspiration or sclerotherapy. These treatments are reserved as a second or third line treatment for comfort purposes for patients who are markedly symptomatic. The literature on hepatic cyst aspiration and possible sclerotherapy in the setting of advanced malignant disease is limited.

Two and a half hours post-procedure, the patient became acutely hypotensive with a systolic blood pressure around 80 mmHg and diastolic blood pressure around 50 mmHg. Further, the patient was tachycardic with heart rate at approximately 110 beats per minute. As a result, another ultrasound was conducted to evaluate the previously drained liver lesion.

Ultrasound showed re-accumulation of complex echogenic fluid in the previously drained cystic metastasis (Figure 1D). These findings are consistent with bleeding into the neoplastic cystic lesion in the right hepatic lobe.

The patient was admitted overnight and stabilized without further interventions. Follow-up ultrasound conducted the following day confirmed echogenic fluid in the right hepatic lobe lesion without any significant change in size. No evidence of active bleeding was noted on Doppler evaluation. These findings are compatible with hemorrhagic cystic neoplastic disease with intermittent bleeding after successful cyst aspiration. The patient was discharged home one day after the procedure in stable condition.

A 70-year-old woman with a past medical history of ovarian cancer presented with abdominal pain. Pre-procedure CT and ultrasound imaging showed a large unilocular cyst occupying most of the right liver lobe (Figure 2A). These findings were highly suspicious for a cystic metastasis given the dramatic increase in size of the lesion since the previous imaging study and the patient’s history of ovarian cancer.

The patient was referred for ultrasound-guided aspiration drainage of the cystic liver lesion with the goal of improving symptoms and to subsequently perform sclerotherapy in the future. Pre-procedure coagulation parameters and platelets were within normal limits. Under direct ultrasound guidance with 1% buffered lidocaine as local anesthetic, a 19 gauge Yueh needle was directed into the lesion from a medial subcostal approach. The cyst was accessed within the anterior aspect (Figure 2B). Initially, thick brown-green fluid was aspirated. Approximately nine minutes after gaining access, and after 1100 mL of fluid had been removed, the fluid became acutely hemorrhagic appearing, and the patient complained of sharp upper-right quadrant abdominal pain. At this point, aspiration was stopped and ultrasound images showed bleeding from the cyst wall posterior and separate from the access site. The ultrasound images revealed an echogenic linear stream of blood leaking into the cystic lesion. (Figure 2C). Approximately four minutes later, ultrasound imaging showed echogenic hemorrhagic fluid throughout the lesion, with continued bleeding; though the bleeding rate had decreased (Figure 2D). These findings are consistent with bleeding into the cystic liver lesion. Delayed imaging showed that the bleeding ceased.

The patient was stable throughout the procedure and closely monitored post-procedure in the interventional radiology recovery unit. The patient was discharged home in stable condition on the same day.

The two patients presented here had a history of cystic ovarian hepatic metastases and developed bleeding into their symptomatic cystic liver lesions after performing a cyst aspiration for pain control. The bleeding did not occur at the procedural access site as definitely demonstrated on real-time ultrasound imaging in case number two. Draining metastatic cystic liver lesions using ultrasound directed needle aspiration has the potential to alleviate pain and improve symptoms as a palliative measure. However, the two presented cases show that hepatic cystic metastases of ovarian origin can be hemorrhagic with potential for post-aspiration bleeding. This must be taken into consideration, particularly when clinical signs of hemorrhage are present. Therefore, based on our institutional experience, close monitoring post-procedure for at least 4 hours is recommended. In one case bleeding occurred during the post-procedure recovery period with monitoring, and in the other case bleeding was noted during the aspiration process in the procedure suite.

The mechanism by which post-aspiration bleeding occurs into a recently drained fluid-filled hepatic cystic metastatic lesion is speculative. We hypothesize that prior to drainage, the fragile blood vessels in the wall of the malignant lesion are compressed by the intracystic pressure generated by the fluid present. When the fluid is removed, the pressure is released and the fragile vessels are susceptible to leakage and hemorrhagic rupture. This hypothesis may be supported by case number two, showing on real-time ultrasound that the bleeding did not occur at the access site, but from a distinctly separate site. 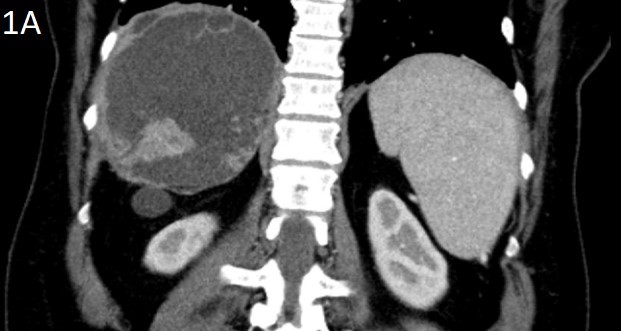 Figure 1A
Complex multiseptated cystic metastasis with internal soft tissue enhancement in the right hepatic lobe is visualized on this contrast-enhanced CT image. 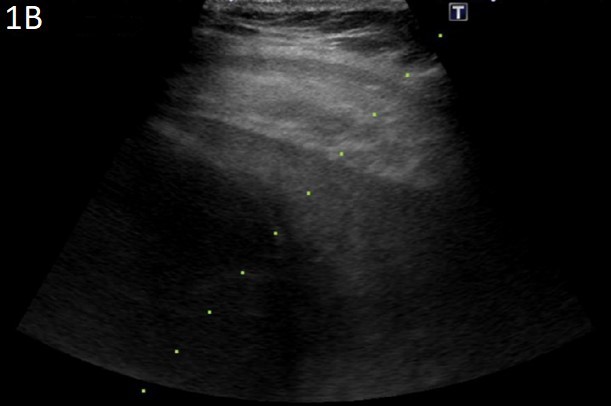 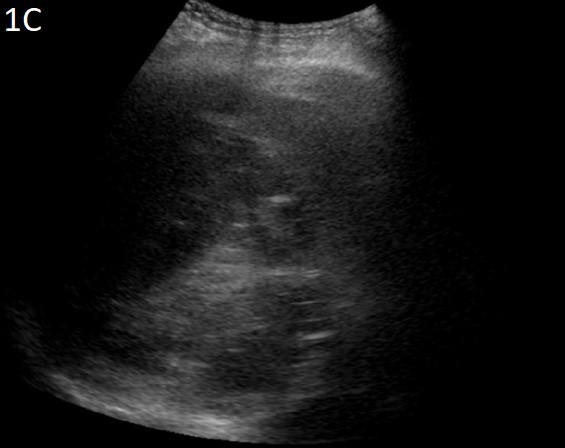 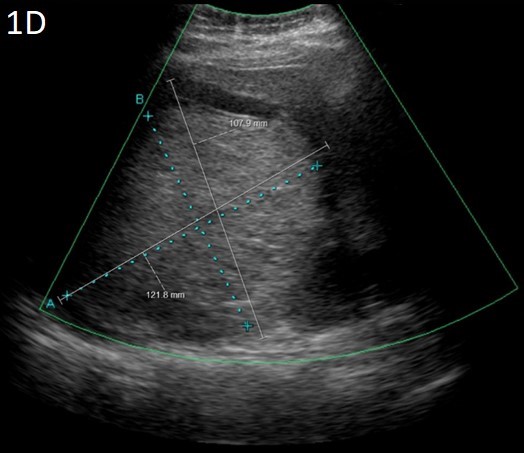 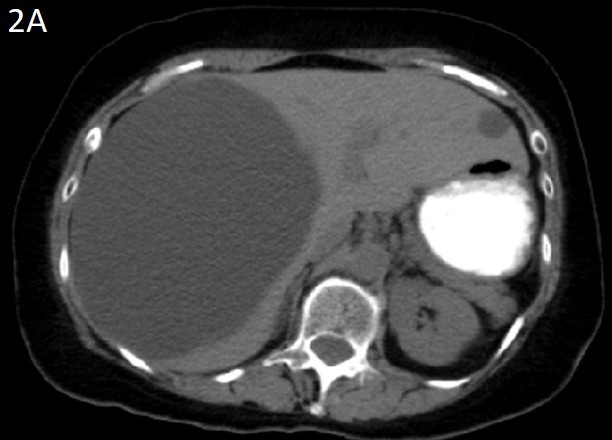 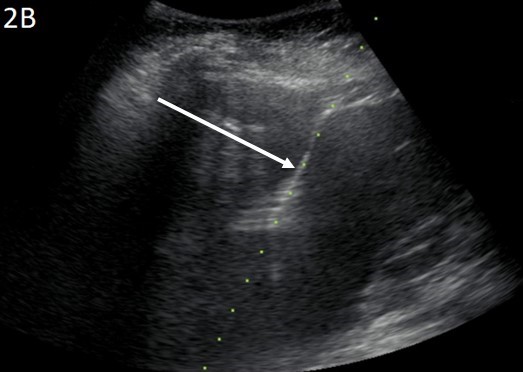 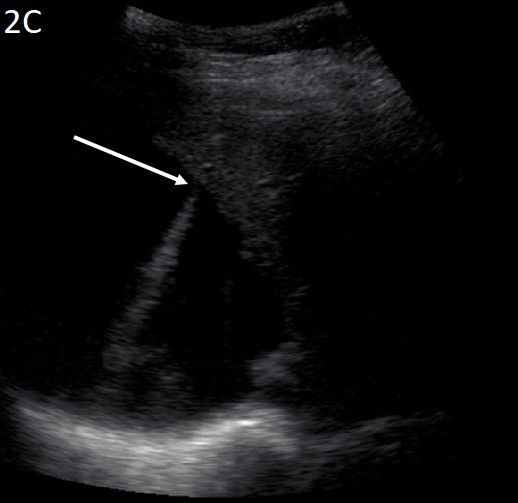 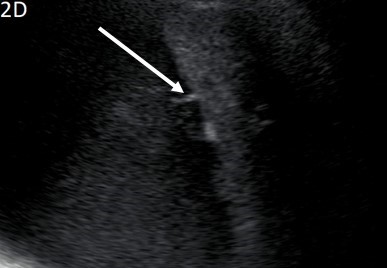